On Tuesday, March 13, the Ohio State Board of Education passed a resolution OPPOSING HB512 and it’s massive shift of education authority from a board with elected representation to a mega-agency under the direction of ONE person appointed by the Governor. 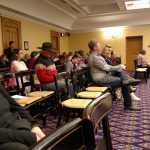